In a massive deal reported to be the largest ever takeover in the tech industry, Dell has snapped up storage provider EMC. On October 12, both companies announced a definitive agreement under which Dell will acquire EMC Corporation in a transaction valued at a whopping $67 billion. Under terms of the agreement, EMC shareholders will receive $24.05 per share in cash in addition to tracking stock linked to a portion of EMC’s economic interest in the VMware business. The tracking stock is valued at approximately $9 for each share of EMC.

Dell and its investment partner Silver Lake are said to have lined up a conglomerate of banks to arrange for financing. According to a Bloomberg article, Dell will actually add $50 billion to its overall debt to finance the deal. Michael Dell will become chairman and CEO of the merged company, while EMC CEO Joe Tucci is expected to step down once the transaction is finalized next year.

A prepared statement issued by both companies claims that the combination of Dell and EMC will create the world’s largest privately controlled, integrated technology company. EMC is a recognized leader in enterprise storage and virtualization technology, and over the years has itself acquired various business solutions aimed at cloud infrastructure and data security. The two firms have identified a variety of synergies, including complementary product portfolios, sales teams, and R&D investment strategies.

The new company will leverage these synergies to drive growth opportunities in strategic areas of next generation IT, such as digital transformation, software-defined data centers, converged infrastructure, hybrid cloud, mobile, and security.  “The combination of Dell and EMC creates an enterprise solutions powerhouse bringing our customers industry-leading innovation across their entire technology environment,” said Michael S. Dell, founder, chairman and chief executive officer of Dell, in prepared remarks.

The deal between Dell and EMC is interesting on a number of fronts. To begin with, it comes at a time when huge corporate mergers have actually become less than vogue. The IT landscape is littered with the remains of massive corporate deals that have not necessarily panned out: HP’s acquisitions of Compaq and EDS, for example. While synergies and growth opportunities are often easily identified, integrating two extremely large organizations while dealing with issues such as redundancies and culture conflict is never simple.

Not every large tech merger has proven to be a failure, but the success stories seem fewer and further between these days. Meanwhile, many larger tech companies are taking steps to streamline — spinning off various segments and carving the conglomerate into separate, more agile businesses to focus on specific target markets and respond quicker to new market opportunities. Here again, HP’s decision to split its enterprise services business from the PC and printing business is a perfect example.

The sheer size and scope of the agreement means that Dell and EMC will face a variety of integration challenges. EMC has grown from its roots in enterprise storage through multiple acquisitions, most notably VMware in 2004. EMC owns more than 80 percent of VMware, which will continue to operate separately as a publicly traded company even after the merger. Other notable acquisitions for EMC include RSA, Pivotal Labs, and Documentum, just to name a few. EMC’s organizational structure is now defined by what it calls the “EMC Federation,” which is the loose collection of separate businesses that each continue to operate with some level of autonomy. Pulling all of this together will no doubt be a challenge.

Nevertheless, there are certainly some attractive aspects to the merger — especially for Dell. Since taking the company private two years ago, Dell has worked feverishly to expand beyond PCs and the desktop to move deeper into corporate computing services. Acquiring EMC provides Dell with immediate clout in the enterprise space by adding cloud computing, content management, IT infrastructure, and one of the most recognized providers in data storage. Combined with Dell’s strength in SMB and its position in PCs, servers, software, and mobile devices, the newly merged company will become a formidable one-stop shop for corporate IT solutions and services.

Robert Palmer is chief analyst and a managing partner for BPO Media, which publishes The Imaging Channel and Workflow magazines. As a market analyst and industry consultant, Palmer has more than 25 years experience in the imaging industry covering technology and business sectors for prominent market research firms such as Lyra Research and InfoTrends. Palmer is a popular speaker and he presents regularly at industry conferences and trade events in the U.S., Europe, and Japan. He is also active in a variety of imaging industry forums and currently serves on the board of directors for the Managed Print Services Association (MPSA). Contact him at robert@bpomedia.com. 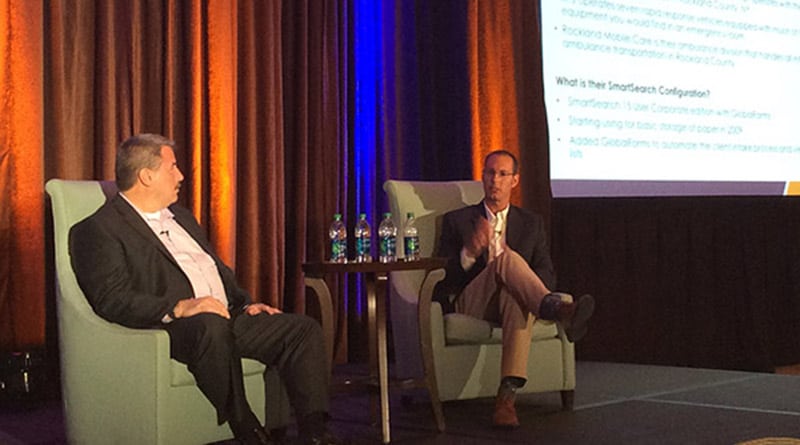 Back to the Future With Square 9 Encompass 2015